Sadness…
I have known many people and never been more alone,
Many hours in their company – no time to be shown,
I gather many things, but nothing fills the hole,
In a house I searched for God, and empty met my soul,
No bleeding wounds afflicted – still feel stabbing pain of knife,
I am still breathing but have lost the pulse of life.

Have you found yourself in a place like this? This place where I have sometimes found myself is when I’ve believed the lie that I Am alone. It’s the feeling I felt as a child, when my mother would ask what was wrong, and I told her that I had the “lonelies.” The Lone Lies would have us believe that We Are alone in our afflictions. This place reminds me of another place depicted in – you can guess where I’m going – The Neverending Story. The place I’m referencing is The Swamps of Sadness: a bog of seemingly no end in sight. Navigating this area of the world is treacherous for our young hero. He ends up losing his closest companion while traveling through, when his friend succumbs to the depths of despair. It’s when you stop moving forward that you begin to sink. You become overwhelmed by sadness which causes you to sink into despair, not having a care for others and not having a care for yourself. You sink into the depths and disappear. You become lost to those that love you.

In my previous post, Embrace the Suck, I discuss the possibility of overcoming obstacles by embracing the situation. There are extreme difficulties that we must navigate in life. By embracing it, we acknowledge the difficulty – we acknowledge our feelings – but we don’t give power to what causes the difficulty. To avoid drowning or sinking into the depths of despair, we embrace what is happening in our life, holding on to what adds value and beauty to our Being. Difficulties aren’t there to ruin us. Difficulties are what bring us to a state of awareness and profound growth and appreciation. We don’t make light of our own or others’ difficulties. We shed light on them so we can see with clear eyes, the situation for what it is, the meaning it adds to our life, and the strength we have to overcome and grow in the experience.

I have all the love I need – if just from one loving friend,
Small amount of time they give me will endure until the end,
I have given up on things for they never do their part,
I found God outside of church in the quiet of my heart,
Wounds are slow to heal, and scars are what I see,
My soul is still Alive and what will always Be
…Hope.

After the young hero, Atreyu, loses his best friend and encounters who they were seeking in the Swamps – he gains information that he doesn’t know what to do with from this ancient creature, Morla. This Being of Apathy is indifferent to Atreyu and his mission, and has no concern for the Nothing that is destroying their world. It encourages Atreyu to give up. Regardless of the difficulty that is revealed to him, Atreyu pushes forward but begins to succumb to the power of despair. All the while he has been on this journey, an enemy has been pursuing him – G’mork. I discuss this dark character in Dark Night of the Soul and who this voice is. As Atreyu is sinking, and G’mork approaches him, he looks up to the heavens and sees light breaking through the clouds. And as “luck” would have it, a dragon descends from the skies above him. Atreyu grabs hold of this dragon and is carried off to safety, narrowly being missed by the large wolf, G’mork. Later, after realizing that the dragon, Falkor, has no plans on eating him, he discovers that this new friend has come to aid him on his quest. Falkor tells Atreyu, “… never give up, and good luck will find you.”

There are times when it seems there are no options but to succumb to despair. The Voice of Lies would have us give up. There are times when we do need a helping hand. I have found help at times in the most unlikely places. In the worst of moments – when all seemed lost – a still, small voice has called out; a light flickered in the distance. Sometimes the voice comes from someone else. Sometimes that voice comes from within, but we have to be receptive to it. We can’t just wait, we have to reach out and grab hold! Someone may throw you a life-preserver or a rope. And sometimes, you have to find that strength within yourself. I promise you, it is there! You must listen and not give in to the Voice of Lies in your head, the voice that tells you: You are not enough; you are too much; no one cares; you are alone. 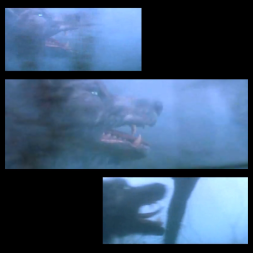 A belief – be it good or bad – is a powerful thing. And if belief is a power, so is doubt.
The seed of doubt takes root in the mind. Give into doubt, and it will take over. If you pull the weed, it appears gone. But under the earth – where you cannot see – a bit of root left behind will sprout again in time. If belief brings light, doubt casts darkness. And where doubt takes hold, fear may follow. Where there is light, there are also shadows. We move through a life of light and shadows. As light grows dim, the shadows grow darker. Not knowing what may be hidden in the dark can cause us to fear. Will we avoid the dark, or will we walk through it to find whether we can come out on the other side? Is the knowing worth the risk?

They say Fear is False Evidence Appearing Real, and “The only thing we have to fear is fear itself.” Because when fear takes hold, rationality is crowded out. It is only natural to have an emotional response to something truly terrifying. We may become frozen with fear. If you abandon rationality, you won’t be able to examine your life or a situation clearly. When you pause and step back – listen to that other still, small voice – you can shine the light of awareness on the situation. A decision made in fear is untrustworthy. It may lead to rashness; it may lead to misunderstanding; it may lead to hate.

But if fear be nature’s catalyst to survive, then courage is mankind’s fuel to prevail. Courage is accepting the situation as it is and deciding to move forward. It doesn’t mean you don’t have fear. You move forward, despite having those fears.

We oftentimes make decisions out of fear. We can also take leaps of faith.
We may leap to flee the monster that pursues us and find ourselves in the wilderness. Now it is up to us to find our way. Fear is believing the worst will happen. Depression is when we don’t believe things will get better – it’s a place where you have become lost, and there seems to be no way out. Having the courage to move forward, and having faith that things will get better, won’t leave fear and sadness by the wayside. We will always navigate these difficulties in life. Knowing and believing the Light within will guide you through this difficulty will show you the way. That Light, the Light of Awareness that shines on the path you may take – that is the still, small voice that whispers. That is the Voice of Love within. Listen to it and find your way. 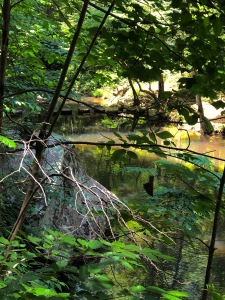 “You will only ever have two choices: Love or Fear.
Choose Love, and don’t ever let fear turn you against your playful heart.”
-Jim Carrey

Published by A Light

View all posts by A Light

One thought on “Swamps of Sadness”